Karzai shoots in the air! 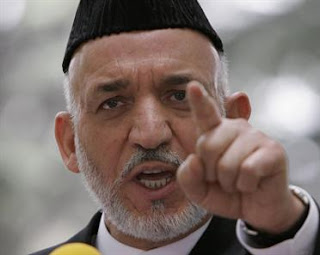 Threatening Pakistan is just a slogan for Karzai’s electoral campaign!

Within a few last days different things have taken place in Afghanistan. It worth to write on the most important items a few lines;

Karzai threatened Pakistan
Returning back from donors’ conference of Paris appearing in a press conference in Kabul, Karzai threatened to attack Taliban in Pakistan if this country does not stop them. Arguing that when the Pakistani Taliban come to destroy Afghanistan, why shouldn’t the Afghan Army attack these Taliban in their caves in Pakistan to defend them Karzai said that Afghanistan has changed and is not the same as a few years back.

Karzai statement was reflected in the national and international media and press and had the reaction of Pakistan prime minister after and the Afghan ambassador in Pakistan was summoned by the foreign ministry of Pakistan.

This was the regional reflection and consequences of Karzai’s threats to Pakistan.
In the national level also, for two days, it was the heading titles of all daily and weekly papers in Afghanistan.

Although it is obvious for all that Pakistan is directly involved in supporting the Taliban, but Karzai direct and threatening statements to this country will not make the situation better but arouses the different groups of tribal areas to be united against Afghanistan and the results will be more human and logistical supports for the Taliban. 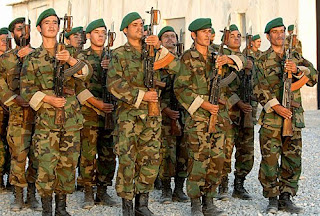 Karzai says this, while he is completely aware of the strength and capability of his new born army ANA; The army that is suffering from ethnic discriminations, lack of enough trainings and equipments and lack of disciplines.
ANA is said to have 70,000 to 80,000 soldiers and officers, while in reality the number is less than this and the training they have is not enough and then, there is a high number of escapes of the soldiers as well as a lot of betrayals for the favor of Taliban which makes it weak against the Taliban within Afghanistan, but how can it fight against them in Pakistan?
Therefore instead of shooting in the air, it would be better to solve the problems that exist within the army and stop those betrayals of the soldiers and officers (who sell classified information of ANA to ISI and army of Pakistan), this way the country would be safer and there would be less peril of Taliban’s attacks.

On the other hand, in this important time when the people live in poverty as a result of rapid raise of costs of food, and most of grain products like flour and wheat and oil is imported from Pakistan, this may cause more pressures of Pakistan on food import from this country.

But if we deeply see it, it seems only a shooting in the air for the electoral campaign as well as hiding the coverage of the other important latest news in the country.

“I wish Taliban were my soldiers”: Karzai

Just a couple of weeks ago, in his interview with German Spiegel paper Karzai wished the Taliban were his soldiers, which was reflected in the media and was criticized by many people.

By that saying Karzai wanted to attract Taliban and Hekmatyar, and then later after he released Hekmatyar’s spokesperson from jail apparently Hekmatyar rejected Karzai’s invitation for negotiation and the Taliban did not show interest for the negotiation either, being hopeless from three sides; dissatisfaction of the International community and the Afghan people for the existing of corruption in his administration that weakens the government, rejection of negotiations by the Taliban, therefore he needed another bang to draw the attentions as well as to overshadow two other important news items of the country; 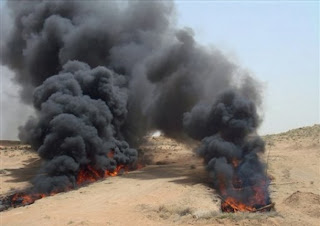 1- The biggest package of drug in the world seized in Afghanistan
Just a few days ago, more than 200 tons of hashish was seized by the Afghan police, army with the help of coalition forces in Kandahar that was the world’s largest package of drugs seized at once.
This was a very interesting item for follow up by the curious media and press which could reveal bigger secrets behind it; the hands of president’s family members with drug Mafia in Afghanistan. Therefore, Karzai stated harsh words against Pakistan to overshadow the news of the biggest drug packages of the world. 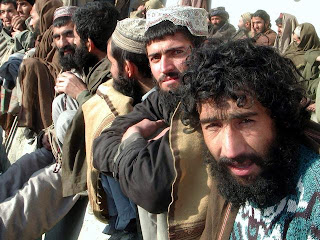 Attacking on the biggest jail of Kandahar in overnight forty Taliban gunmen destroyed that gate of the jail, killed the police guards and released more than one thousand prisoners one third of who are their members.
This is also something planned with the help of the corrupted provincial administration that is appointed by the president.

This news is also of a high importance for the Afghans as well as for the international community to know how their efforts are being spoiled by a group of drug and embezzlement Mafia within the team of president Karzai.
As the reports of media and press show, before the Taliban were released in smaller numbers whether by the decrees of President Karzai or by the intercede of Sebghatullah Mujadadi and his Taliban Strengthening Commission but now as the elections are approaching, they are released in bigger numbers and by different ways, so attack on Kandahar is one of the new ways of process of release of the Taliban by the help of Karzai’s family and his team.
Posted by Mohammad Amin Wahidi at 4:36 AM No comments: Links to this post