Here is Afghanistan; he is punished who tells “The Truth”! 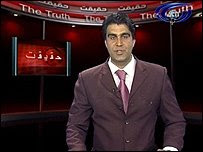 Just imagine how difficult it is when we hear a friend or a former colleague, a person of the same field we work is being arrested, punished or sentenced for punishment just for his activities in his professional field and more important when this field is public awareness.

Lately Nasir Fayaz a former friend and colleague of mine in ATN in Kabul Afghanistan is being arrested by the NSD (National Security Department) of Afghanistan for his program Haqiqat or “The Truth”. 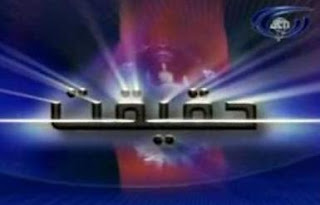 Nasir Fayaz, as one of the best Dari newscasters in ATN produced and presented a criticizing weekly program titled “Haqiqat” that means “The Truth”.
This weekly program mostly criticized the arenas where the government of Afghanistan had weaknesses in its performances such as; administrative corruption, lack of enough work done by the government, bribery, former Mujahedeen and justice process, Taliban’s empowerment, rule of law, function of the three branches of the government, useless projects implemented, mistakes in Afghanistan’s foreign policy, Afghan – Pak relationships, embezzlements by the ministers and etc were mostly the main issues discussed and analyzed in each episodes of this program.

Apparently the NSD (National Security Department) of Afghanistan, has illegally arrested Nasir Fayaz accusing that the council of ministers and cabinet members has complained against him for baseless accusations against the senior governmental officials including some ministers in his program Haqiqat, while in reality it is not the responsibility and jurisdiction of NSD staff the deal with the media and press issues. Even if this accusations of council of ministers is to be dealt with, it is the commission on media law violations to take the responsibility and deal with such issues not the NSD but unfortunately, who presides this commission is one of the most fundamentalist figures of Afghanistan; Karim Khoram the current minister of Information and Culture who has already been acting against the journalists of free media in passed year, in this case the NSD should not have arrested this journalist.

In 2006, Nasir Fayaz received the of the best journalist-newscaster award of the year by the Ministry of Information and Culture, while nowadays this ministry is still quiet and has not yet acted for his immediate release.

This journalist is being arrested while Parviz Kambakhsh, the other Afghan journalist is still suffering being imprisoned for some months without a clear final decision of the judicial branch of Afghanistan, which is an apparent act against freedom of media and press in an emerging democracy in this country.

It is to say that so far some journalists of Ariana Television were beaten up by members of parliament and in some cases by the police or army.

In addition to threats by the governmental departments against the Afghan media activists, on the other hand the Taliban and other fundamentalists who are some how being supported by the government as tools are also still a big part of threats against the media activists and journalists.
Hanif Elham another producer - journalist from ATN who runs brightening human rights programs for radio and television on this channel, has been repeatedly threatened to death for several passed months by the Taliban and thus he has to live in hidden and has to change his commuting routs time to time in order to be safe from the reach of the fundamentalists.

Unfortunately lately we got that filmmaker Zaki Merzaiye who made his documentary about the life of the only Jew in Afghanistan was threatened by the extremist Islamists and has escaped to an unknown place, this was emailed to us by his close friends and family members.

Confining the freedom of speech and expression in Afghanistan is a deliberately created obstacle by the government in order to achieve some of its political goals illegally while on the other hand the religious fundamentalists and extremists take more advantages for their own goals out of this policy of the Afghan government; as a result fundamentalism is promoted once again in the country with the direct and indirect help of the government.

As the preparations begin for the upcoming elections, the ruling government applies more pressures especailly on those free media that criticize the it and point out its weaknesses.

For this reason it is expected that more of free media activists would be suffucated in this period.
Therefore we want the family of media and press in Afghanistan to object against this policiy of the government of Afghanistan as well as ask the interference and efforts of the International Community member states for the immediate release of Nasir Fayaz and Parviz Kambakhsh two journalists who are illegally arrested and are imprisoned without any clear reasons and for more protection to free media activists of Afghanistan.
Posted by Mohammad Amin Wahidi at 1:43 AM No comments: Links to this post