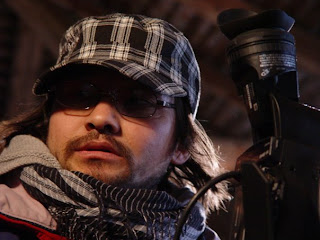 
Lately we heard that famous Afghan filmmaker Mohammad Khadem Haidari is mournful for the sudden death of his elder brother in a car accident in Iran, hence Deedenow Cinema Production Afghanistan submits cordial condolences to Mr. Haidari and his family members.

Losing a dear person is a big sorrow, a never-forgetting burden on one’s heart, thus accepting the fact that death is an irrefutable path that every one has to follow earlier or later, can give a bit of peace and patience to the mournful family.

We hope this sorrow as a sear on his heart, would not affect Mohammad Khadem Haidari’s efforts in his filmmaking activities which has made a remarkable contribution to the Emerging Afghan Cinema of the new era.

Mohammad Khadem Haidari as a diamond under the ash has always tried to keep low profile and do great things off screen –behind the scenes without thinking about fame and positions but only and only cinema and the art of how to reflect a thought or an emotion through images.

Haidari has studied cinema in Baagh e Ferdaus, a cinema faculty in a Teheran University in Iran then has worked as a filmmaker and television producer in Kabul from 2002 -2006 when he has contributed to many successful film projects in Afghanistan.

In addition to making films in this period, he has worked for production of youth programs in RTA Afghanistan National Television in Kabul and Bamyan.

After four fruitful years of filmmaking, he was forced to immigrate to Italy due to security problems he had in 2006 in Afghanistan.

Here in Italy, in addition to documentaries he has made, he has a short and two feature films in his carrier which were all screened in Venice Film Festival 2008, 2009 and 2010.

Director of photography and cinematographer

Posted by Mohammad Amin Wahidi at 2:44 PM No comments: Links to this post