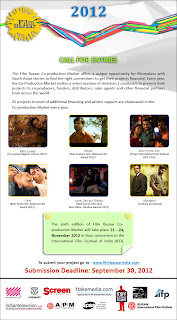 ABOUT FILM BAZAAR
An evolving trade market for film industry professionals, Film Bazaar is committed to discover and support significantly compelling talent from South Asia and address key concerns of the world film community in the dynamic domain of film development, production, and distribution. From 2007 onwards FB is a converging point for buyers and sellers of film rights and is aimed at facilitating sales of world cinema in the South Asian region and the promotion of Indian Cinema in the international domain.
2012 will see 6 original stories by Indian writers, 25 potential projects relating to South Asian stories, Knowledge Series sessions with noteworthy film industry doyens & prominent film organizations. The Film Bazaar Viewing Room will house unseen films looking for gap finance/distribution partners/scrfestival selection as also films featured in the Indian Panorama (IFFI). A partner program with Primehouse (Germany) PrimeXchange is a co-production initiative that provides a forum for independent European and Indian Producers to engage in an open and collaborative environment with hands-on media industry experts.The market is also equipped with an Exhibitors Section where booths can be booked, and digital theatres for trade screenings of films.
Organised annually alongside the International Film Festival of India (IFFI) at the Goa Marriott Resort, the market is a gamut of activity where delegates buy, sell, exhibit and pitch their content. The sixth Film Bazaar will be held from November 21 - 24, 2012.
Posted by Mohammad Amin Wahidi at 4:42 PM No comments: Links to this post