A short note on "A Separation" a film by Asghar Farhadi 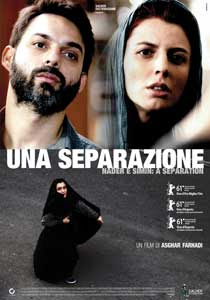 The day of its premiere in Milan, I did not have the chance to watch the film, but I only could meet with Asfghar Farhadi a couple of hours after the film première when he had a conference in Anteo Spazio Cinema in Milan.

Fortunately today I could go and watch the film. I liked it very much!

The film was notable and it really deserved the awards it had already won in different film festivals including the Golden Bear at The Berlinale 2011.

The director was smart and knew very well how to play with the emotions of the spectators.

I haven't watched though his previous films yet, but from now on, I would like to see all his previous works and follow his upcoming projects as well.

In "A Separation" the first thing I liked was the rhythm of the overall film. Quick sequences had helped adding more tension to the story.

If I'm not wrong, almost the entire film was shot by camera in hand or over shoulder, not still and stable shots. This holding on shoulder action of the camera work, helped giving more energy to the film and gave a good pace to the sequences. I liked the photography in general as well, while a lot of medium close shots were used that give a very easy chance to the spectators to get very close and feel being very into the core of "what is happening".

The performances were excellent, almost all characters. The actors some of whom are very famous like Laila Hatami have performed realistically, as the performance of non- professional once-used actors who are used to play the role of their real lives and are usually forgotten after one or a couple of performances.

During his conference after the premiere, the director mentioned that before he used non-professional actors in his films but then he has decided not to continue it anymore.

The story is about a couple with a teenage daughter who want to separate but can not for each of them has his and her own problems.

With a very simple linear storyline it begins with a scene in a civil court about the separation of the couple and then other things begin to happen and slowly on the spectators merge into the story and goes on with it until the last minute.

Going on with the film, the spectators begin to discover one by one the gaps between different social classes and their specific problems, the social complications that exist in contemporary Iran, the complication of laws and their controversy with the social circumstances of people’s lives.

The existence of “Human conscience” and “The Question of Morality” in a today’s society with its specific problems is a point highlighted, questioned and balanced in different circumstances to put the spectators the question, “What would you do, if you were him or her?”

The film does not have slogans and it is well- made in a realistic style. The scenes in the courts are shot very real and with documentaritic style.

The other point of strength of the film is that it doesn’t judge the characters by painting them absolutely black or entirely white, but it puts them in different situations with different reactions and gives a space for the spectators to think and judge them based on each condition they were in.

I think the good thing about a successful film is that "what comes next" would be in contrast with what the spectators expect, I like this method in filmmaking, and Asfghar Farhadi was successful in playing a game with the spectators to keep them in the salon until the end, and then at the end let them go home with a burden of thoughts in mind and many “Uuuuffffs”, "WHYs" and "I WISHs" and a sympathy or a feeling of the spectators with the characters they saw in the film; thoughts that may jingle for a long time in their minds and keep them thinking about the film and its characters.

Posted by Mohammad Amin Wahidi at 3:29 PM No comments: Links to this post